Supermarket dietitians, check your email this week for the summer edition of the quarterly Shopping for Health e-Newsletter. In this issue you’ll find lots of great materials and information, designed to help in your communications with shoppers.

In the June issue of Shopping for Health, look for:

Everything you need to assist customers who are interested in plant-based eating, courtesy of the California Walnut Commission. There’s a get-started grocery shopping list, as well as handouts explaining how to replace saturated fats with monos and polys, nutrition information on walnuts, and some great recipes.

From Daisy Brand Cottage Cheese, shopper tips offering healthy snack ideas. Try these great pairing ideas to team Daisy all-natural cottage cheese with some tasty, nutrition-packed sides. Also, how to talk to shoppers about meeting protein needs with cottage cheese, and a complete guide to how to shop your store to meet MyPlate recommendations.

Back-to-School handouts, news and stats from Mini Babybel Cheese. Check here for creative tips for the lunch bag or box as well as detailed customer fact sheets on the many flavors of Babybel Cheese. Social media and Tweet tips included!

These recipes, photographs, social media ideas, nutrition backgrounders, customer handouts and more will be available in the Shopping for Health archives for up to one year. Make your life as a supermarket dietitian easier by visiting the content library and archives at www.shoppingforhealth.org!

Women who care about basic nutrition, healthful ingredients and who want to replace meals by eating-on-the-go. In fact, women aged 20 – 30 say they get 30% of their daily calories in the form of “snacks.”ᴬ

Here’s the breakdown on what Americans consider their favorite snacks to be:

We nosh throughout the day, with 31% of our snacking occurring in the morning, 26% in the afternoon, 22% in the evening and 22% later at night. The single most popular time of the day to grab a nibble? 3:10 p.m.!  But more than sixty percent of shoppers say they snack at least one to two times a day, and another twenty percent say three to four. (Who are the ten percent who say they never snack?!)ᴬ

Cottage cheese is a snacking choice of 28% of “health conscious” consumers, according to research conducted by Daisy Brand Cottage Cheese. And with just four ingredients – cultured skim milk, cream, salt and vitamin A palmitate (an antioxidant added to dairy products to replace the vitamin A lost in production), Daisy Brand fills the bill for those looking for the most natural cottage cheese. Most other brands have ten or even more ingredients.

At Shopping for Health, we enjoyed a tasty Cottage Cheese Bar to create tasty and healthful snacks combinations. Here are some super pairing ideas: 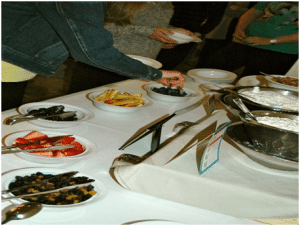 One scoop of Daisy Brand Low-Fat Cottage Cheese, plus:

ᴬAll statistics from Nielson 2014 report on snacking in America

Water is the most essential nutrient for life, but the U.S.D.A. dietary guidelines focus primarily on what to eat, rather than what to drink. And as a result, too many people drink sugar-sweetened beverages instead of water. Twenty percent of our daily calories – and nearly half of all added sugars – come from beverages, according to recent national nutrition survey data. Half of all children and adults say they drink at least one sugar-sweetened beverage a day.

Encouraging shoppers to drink zero-caloric bottled or sparkling water in place of sweetened beverages is a primary strategy towards helping people meet the recommendations in the U.S. Dietary Guidelines for Americans. Health professionals give these guidelines on limiting caloric intake from beverages:

American Heart Association – Limit the consumption of sugar-sweetened beverages to 450 k calories (36 ounces) per week, for a 2000 k calorie diet.

World Health Organization – Limiting intake of free sugars to less than 10% of total energy is part of a healthy diet. A further reduction to 5% or less is desirable for additional health benefits. Sugar intake can be reduced by limiting the consumption of foods and drinks containing high amounts of sugars.

As we move into the hot summer months, adequate water consumption is more important than ever. From Nestle Waters USA, here is a visual guideline to use when talking to consumers about how to best structure beverage consumption, to provide the hydration needed each day.  Recommendations are based on a 2006 Journal of Clinical Nutrition study, and USDA data. 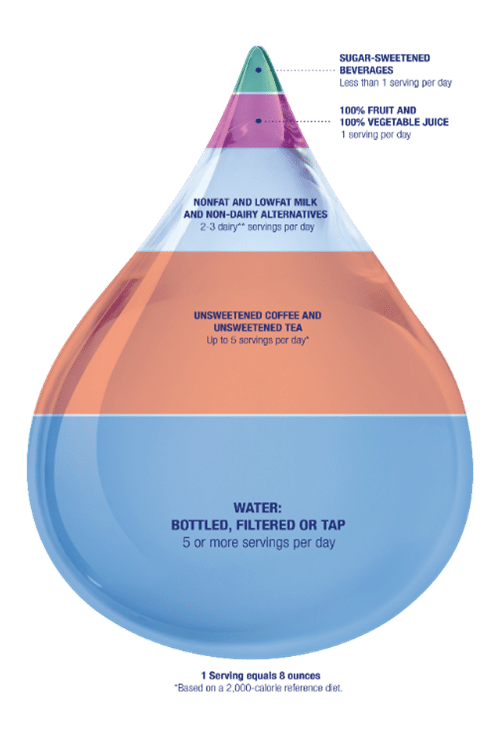 Do you get questions about fats like cooking oils? There are many misconceptions about fats and health and, without knowing the facts, your shoppers may be missing out on the bene­fits of heart-healthy oils.

Here are some other myths and facts about corn oil, provided by Mazola®:

FACT: Research suggests eating about 1 tablespoon (16 grams) of corn oil daily may reduce the risk of heart disease due to the unsaturated fat and plant sterols content.

MYTH: Corn oil should only be used for frying

FACT: Mazola® Corn Oil has a high smoke point above 450°F and mild taste, making it appropriate for baking, grilling, sautéing and stir-frying.

Thanks to the Mediterranean diet, extra virgin olive oil often gets the kudos for being the healthiest oil. But a new study reveals that corn oil lowers the “bad” LDL and total cholesterol more than extra-virgin olive oil (EVOO).ᴮ

In a study published in the Journal of Clinical Lipidology (December 2014), two groups of subjects were given a balanced diet for 21 days that included three foods made with either a total of 4 tablespoons of corn oil or 4 tablespoons of EVOO. The foods were yogurt, a pumpkin muffin or carrot cake, and a rosemary garlic or wheat dinner roll. Participants who had the four tablespoons of corn oil daily in their food had a lower level of LDL (“bad”) cholesterol at the end of three weeks, as compared to those who consumed the EVOO. The corn oil group also had a lower total cholesterol level. This is because corn oil has more naturally-occurring phytosterols than extra-virgin olive oil, 528 versus 120 milligrams.

And when it comes to cooking, remember that corn oil has a higher smoke point than olive oil –400-450 degrees F for corn oil, versus 325-375 F for olive oil. This, along with a naturally mild taste, makes corn oil more versatile in the kitchen than many cooking oils. 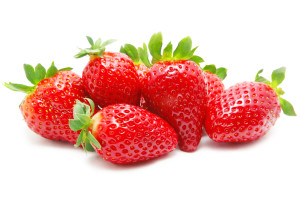 May is National Strawberry Month, a good time to take note of reasons to encourage more consumption of America’s Favorite Fruit. The California Strawberry Commission presented these to supermarket RD guests at this year’s Shopping for Health conference. Here are some highlights:

Number One: Strawberries are packed with nutrients. A cup-size serving contains more vitamin C than is found in an orange, fiber, folate and potassium. And all for just 45 calories.

Strawberries are also a favorite Superfruit, meaning that they contain a variety of bioactive compounds that converge to fight oxidation and inflammation. More than 110 studies concerning strawberry consumption and human health have been published since 2006.

And in addition, there is emerging science that is showing that eating strawberries reduces the risk of chronic disease. Four servings of strawberries a day lowered cholesterol and reduced oxidationª while three servings reduced insulin response.ᴮ

Here’s one more: Strawberries work in diabetes meal planning. They provide just 7 grams of sugar per serving, less than apples, bananas, grapes and oranges, with a low glycemic index. The American Diabetes Association names strawberries as one of ten superfoods in a diabetes meal plan.

California is the leader in U.S. strawberry production, with 1.6 billion pounds of fresh strawberries and 400 million frozen strawberries produced annually. That’s 88% of all strawberries grown in the U.S. 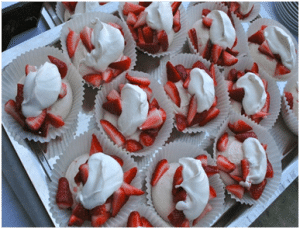 If you were at the Shopping for Health 2015 conference in Napa, are you still dreaming about this fabulous Strawberry Pavlova dessert?

The fifth annual Shopping for Health conference for supermarket dietitians returned to the place where it all started in 2011 – gorgeous Napa, California! Top representatives from multiple supermarket chains around the country spent three days in Napa, networking, learning from nutrition and culinary presentations, and tasting recipes and foods prepared by some of the best chefs in the country.  Leading food industry sponsors were also there to update this important group about their products. In just five years, Shopping for Health has become the premier annual gathering for supermarket dietitians who are interested in helping their stores better communicate nutrition news to shoppers.

Some of the topics of interest at Shopping for Health 2015:

If you couldn’t join us this year, we missed you! But check here in the coming weeks for photos, blog posts, special presentations and other information from the conference. We have it all here and are ready to share with you, and, if you’d like, put you in touch with the researchers and speakers who made the news. Here are a few photos below; check out the entire Napa 2015 conference photo gallery here.

If you were at Shopping for Health 2015, what was your favorite part of the conference? We’d love for you to post here something that you learned! 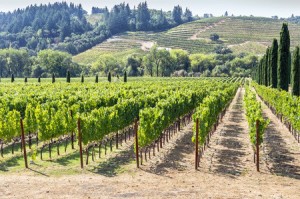 What happens when a select group of supermarket dietitians come together for three days, meeting with leading food industry executives to hear science and health updates, enjoy product tastings, and discuss ways to better reach shoppers with the nutrition news they need?

“The annual Shopping for Health meeting is one of the most important meetings I attend all year,” says Julie, a supermarket RD. “It’s the perfect mix of networking, information exchange, product demonstration and fun. I always come back inspired with ideas on how to better do my job of communicating nutrition information to consumers.”

Shopping for Health 2015 will take place March 8 – 10 in beautiful Napa, California. This fifth annual conference will once again provide the supermarket dietitians with the information they need to help consumers make wise choices at the grocery store. And, at the request of many retail dietitians, SFH 2015 will immediately follow the meeting of the Food & Culinary Professionals Dietary Practice Group of the Academy of Nutrition and Dietetics, allowing attendees to enjoy both meetings if they desire.

Program activities include a session on food styling tricks of the trade and a discussion of the role of the supermarket in retail healthcare. Attendees will enjoy a cooking demonstration and nutrition updates on foods and beverages ranging from water to walnuts. Shopping for Health is made possible by the support of food industry sponsors.

For more information about Shopping for Health 2015, contact nancy@shoppingforhealth.org. 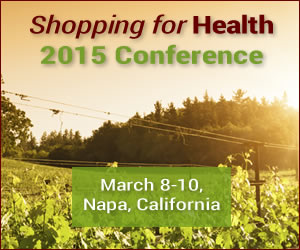 Back by popular request from our retail dietitians, SFH 2015 will once again immediately follow the meeting of the Food & Culinary Professionals Dietary Practice Group of the Academy of Nutrition and Dietetics!

Retail RDs who are guests of Shopping for Health will again have the option of flying to Napa before the SFH conference, in time to attend the DPG meeting.

If you are a supermarket dietitian at a leading grocery chain, please contact Shopping for Health for information about this meeting. Each year, we host an exclusive group for three days of nutrition, health and culinary presentations, leading industry speakers, delicious meals, fun events and outstanding networking opportunities. Continuing Professional Education (CPE) credits from AND are offered for participation.*

Look for your Invitation to Shopping for Health 2015 soon!

*Application in process, as final program is developed.

Mini Babybel® has a great opportunity for you to share with your shoppers! Via social media, Babybel is currently recruiting a lucky, incredibly qualified family to represent his awesomeness across the land. The winning family will win an all-expense-paid trip to NYC, where their mission will be to have as BIG a time as possible. Encourage your shoppers to enter today through September 26 – details below! 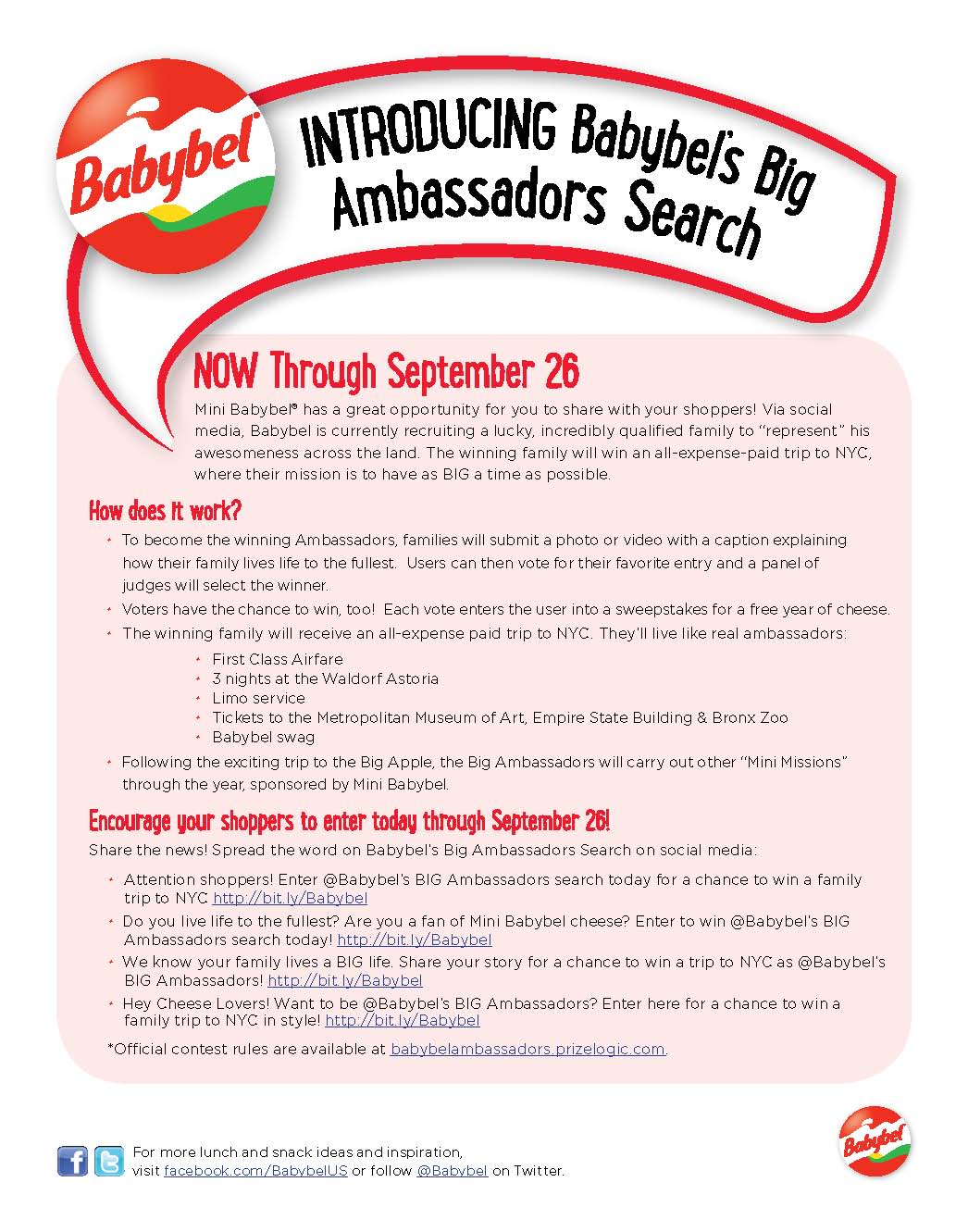 Shopping for Health works to provide high-quality, RD-reviewed materials and information about various food products to retail dietitians at grocery store chains throughout the U.S. and Canada. We are so pleased to see the many ways that those materials are used!

Here’s an example of how a grocery store dietitian reached shoppers in her area on behalf of her store, with nutrition information and recipes about rice: